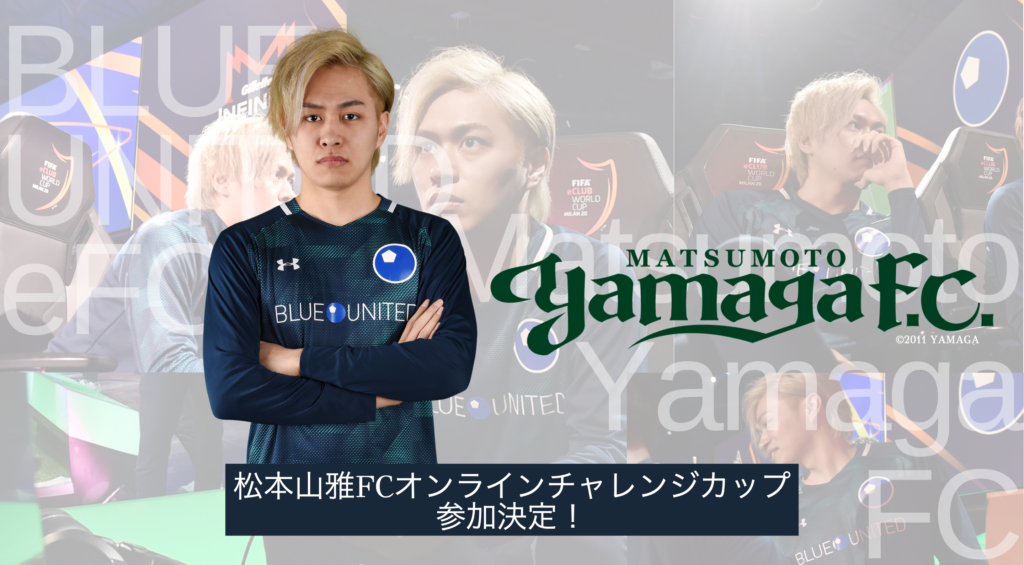 This is the first time in history for Matsumoto Yamaga FC to organize an esports competition. Blue United will provide consultancy to organize Matsumoto’s first esports tournament and to create special content to engage with fans.

Moreover, Blue United eFC’s professional player AGU, whom also represents the Japanese National Team; will compete with several legends and fans of the club in this event.

In the middle of the pandemic of COVID 19 and the suspension of J.LEAGUE, this tournament aims to provide fans and the club’s local community with more opportunities to connect with the organization, and its players.

As Matsumoto Yamaga’s President stated “during these unprecedented times, we need to find new ways to create content and connect with our fans. Blue United’s international experience and knowledge has been and is key for our Club’s growth; and we are happy to count on their assistance for this event.”

“Blue United has been helping teams, leagues, athletes, and corporations grow internationally and in the Pacific Rim region, mainly in Asia and North America” said Takehiko Nakamura, President and CEO of Blue United. “We are honored and more than excited for this opportunity as we share many values in common, and look forward to continue helping Matsumoto Yamaga FC achieve its goals. Not only in Japan but also internationally.”

“When I represented Matsumoto Yamaga FC in the eJ.LEAGUE Online Challenge Cup (J.League’s Official esports tournament), I felt I truly connected with their fanbase” said AGU. “The fact that they created a chant for me made me feel truly honored. Especially knowing this was the first time in history that a Japanese eSports player was given a chant from club supporters. I am excited to participate in this event and looking forward to having a great time with Matsumoto Yamaga FC and its fans again.”

The Matsumoto Yamaga Football Club is a historic club that was formed in 1965 by players selected by Nagano Prefecture at the time. The club was first promoted to the J2 League in 2012 and then played in the J1 League in 2015 and 2019.