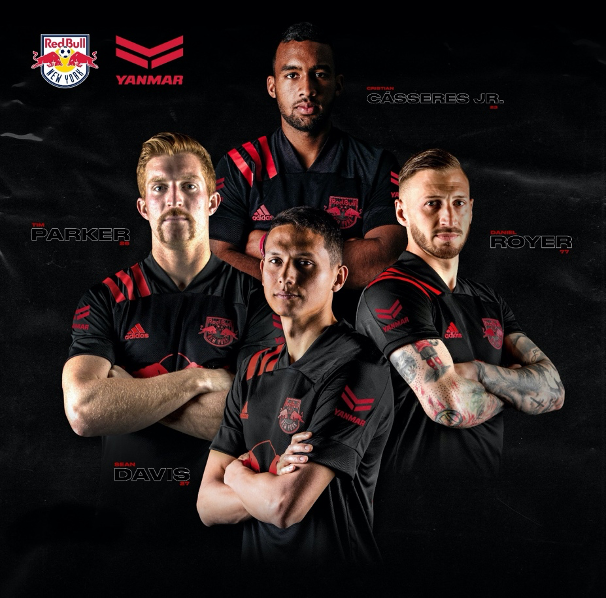 In advance of the New York Red Bulls return to action with the MLS is Back Tournament in Orlando, Florida, the Club announced today that Yanmar will have enhanced presence by being featured on the First-Team kit. As the official sleeve-patch partner, Yanmar’s logo will be displayed on both sleeves of the team’s uniform for the duration of the nationally-televised tournament.

Yanmar has been the New York Red Bulls official Agricultural Machinery Partner, Marine Partner, and Diesel Engine Partner since 2015. Yanmar was the first partner to have permanent branding inside of Red Bull Arena and has also featured on the sleeve of the club’s training gear since 2015.

The MLS is Back Tournament kicks off on July 8, with the Red Bulls first match coming on July 11 against Atlanta United FC. Kickoff is set for 8 p.m., with coverage on FOX and TUDN. The tournament will be held entirely on the properties of Disney’s Wide World of Sports complex. Extensive health and safety protocols have been put in place for the well-being of players and staff, including regular Covid-19 testing.

Founded in Osaka, Japan in 1912, Yanmar was the first ever to succeed in making a compact diesel engine of a practical size in 1933. A pioneer in diesel engine technology, Yanmar is a global innovator in a wide range of industrial equipment, from small and large engines, agricultural machinery and facilities, construction equipment, energy systems, marine, to machine tools, and components — Yanmar’s global business operations span seven domains. On land, at sea, and in the city, Yanmar provides advanced solutions to the challenges customers face, towards realizing A Sustainable Future. For more details, please visit the official website of Yanmar Holdings Co., Ltd.
https://www.yanmar.com/global/

About the New York Red Bulls

The New York Red Bulls are one of 26 teams in Major League Soccer (MLS). RBNY, one of the ten charter clubs of MLS, has competed in the league since its founding in 1996. The Red Bulls play home matches at Red Bull Arena (RBA) in Harrison, New Jersey. The three-time MLS Supporters’ Shield Winners are owned by the Austrian beverage company Red Bull for which the team is named. The New York Red Bulls offer one of the nation’s premier youth soccer development programs, from local soccer partnerships across New York and New Jersey to Regional Development Schools and the Red Bulls Academy teams.