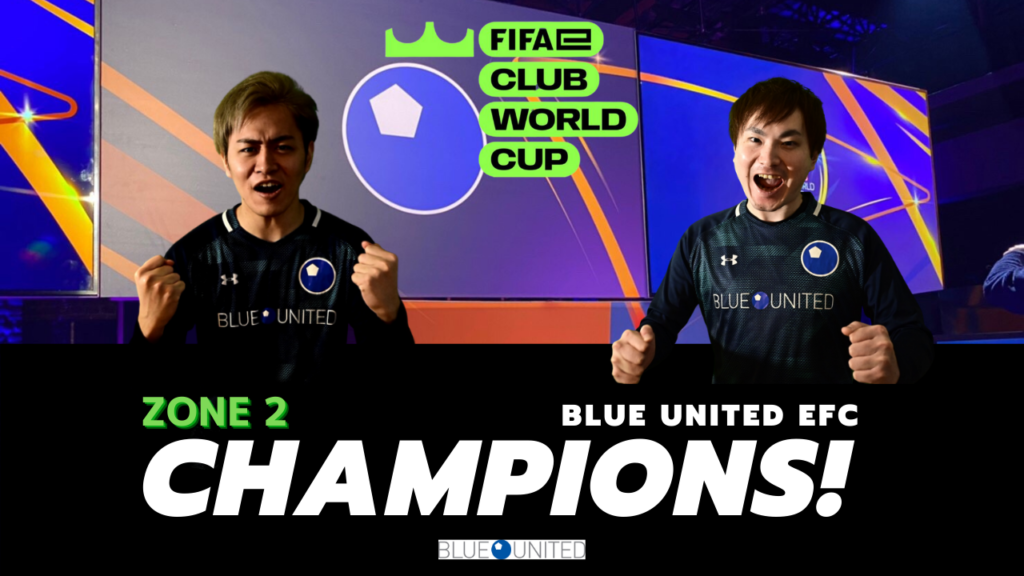 The FIFAe Club World Cup was established in 2017 as the official tournament of the EA SPORTS FIFA Global Series to determine the world champion of the e-football club.

From this year, FIFA’s e-sports division FIFAe will host each continental qualification as an independent tournament. Blue United eFC, current EA SPORTS FIFA 20 Asian Champion, won the Zone 2 (East Asia) online qualifiers which were held during 4 weeks in January, 2021 and their participation in the finals has been confirmed.

Blue United eFC won pass the round-robin tournament as 1st place on the first day in the tournament. The team won the final against Wicked Esports on the second day and is crowned Zone2 (East Asia) Champion.

“As a frontier in professional eSports in Asia, we are proud of this historic accomplishment.” said Takehiko Nakamura, President and CEO of Blue United.  “4 years ago when we launched our professional eSports team, Blue United eFC, nobody saw this coming this quick.  I believe that this is a testament to how you see things.  We saw it as an opportunity rather than a non-existing market.  It also demonstrates how we analyze the market globally rather than just domestically.  In this sense, I am excited about what the players and staff have built and have been making the right investment and business decisions.  Last but not least, I would like to thank each and all of you that have supported us to this point.”

“I am relieved to have won. Other than that, I cannot find the words right now.” said Tsakt, the professional player from Blue United eFC. “After the first game, I thought that if I could play the way I had been playing, I could get into a good rhythm for the second game. In the second game, it was hard to get any additional goals, but I think I was able to concentrate on my defense with the help of AGU’s encouragement. To be honest, it was a very hard battle, but I can only thank AGU for helping me get a win in a tough situation. Thanks to him, I was able to focus on all two games! I think this is a title that everyone on Team Blue United won together as one. I also think that we have grown a lot as a team. I would like to thank everyone who supported us!”

“It’s been a long time since I’ve been away from home, and I’m tired, but I’m more than happy. This is the title we wanted most as a team, so I’m relieved to have won.” said Agu, the professional player from Blue United eFC. “I lost the first game and had a lot of trouble before and during the game, and to be honest, I was very frustrated. However, everyone on the team supported me, so I was able to switch gears and win the second game. It was a team game, so I think our experience in Milan last year and our team strength came out in this scene. I would like to thank all the people who have supported me, my teammates, the staff, GG Shibuya for renting us the venue, and everyone else involved. I think this is a victory that we were able to capture together with everyone, and I’m glad that the number of people involved has increased. Thank you very much for your support!”

This will be the third time in total and twice in a row Blue United eFC participates in the FIFAe Club World Cup, which is a record in Asia.

FIFAe Tournament Brand
The catchphrase “Fame your game”, has a broad focus on a community where everyone can participate. FIFAe, the official FIFA eSports division created this season, will host and run the FIFA eWorld Cup, FIFA eNations Cup, and FIFAe Club World Cup throughout the year.
https://www.fifa.com/fifae/news/fifae-tournament-season-kicks-off