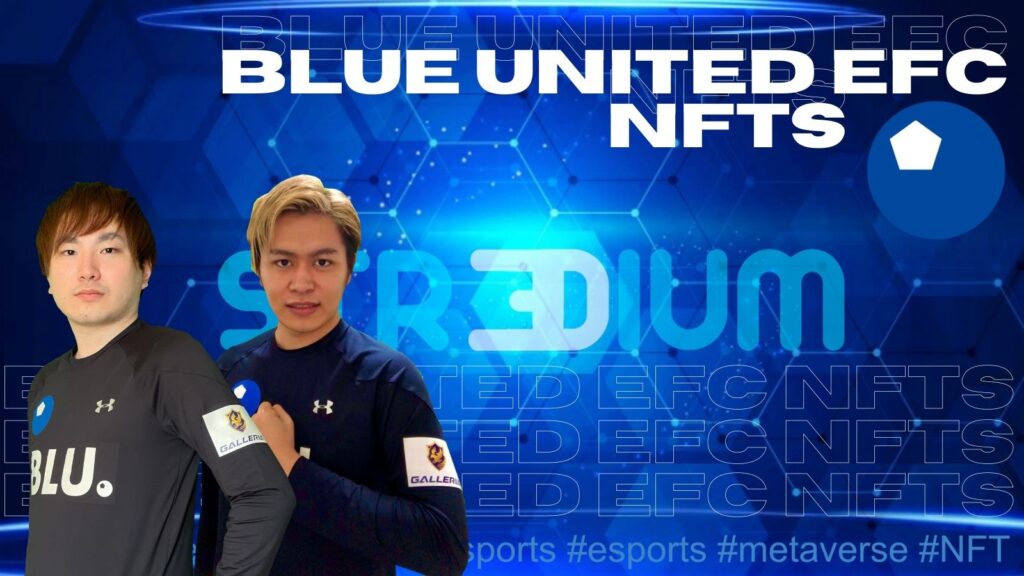 Blue United eFC is top 5 in the world and is composed by 2 professional gamers, Agu and Tsakt, which are considered the highest talent in football gaming by industry experts and media.

The NFTs will be created in partnership with Stredium, a company with HQ in London and Spain specialized on creating and selling collectibles, and memorabilia by using NFTs blockchain technology.

The release date has been set for the end of May – beginning of June. For additional info or to be notified when the NFTs are released, please write to: info@blueutd.com .

“Our company has always been operating based on our Mission and Values.” said Takehiko Nakamura, President and CEO of Blue United. “Creating of our professional eSports team is one of the notable examples – “Zero to One mentality,” and the team has quickly become one of the top powerhouses in the world. We do not stop here and now aim to develop a more innovative project combining the two areas that are said to be the future of sports business – eSports and NFTs, again based on one of our values – “Frontier spirit, Unconventional mind.” We hope that this will be the new way to engage with our global fans, and we are excited to partner with Streidum on this venture and look forward to building more.”

“We are a team that is always focused on innovating and challenging the status quo on and off the console, and, for that reason, we are very excited to start this journey and launch our first NFTs project.”, said Javier Sanz, VP of Business and Legal Affairs of Blue United. “We have been working on this project for months and, for us, this initiative is key to connect with our fans and build a global Gen Z community, while tapping into the unlimited potential of combining gaming and cryptocurrency.”

“The future of collectibles is more than digital.”, said Josep M. Monti, Stredium CEO. “We have been fortunate to find the perfect partners in Blue United eFC and its innovative vision. Together we have created a top NFT collection that we are proud of and that fans will sure love. The best moments of eFC have been synthesized in seven exclusive NFT collections thanks to everyone’s innovation and creativity. The real value will happen when they’re able to experience these NFTs in the real world as well as the digital world. Soon available for purchase on NFT’s marketplaces.”

About Stredium
Stredium is a company based in England and Spain specialised in Blockchain and in digital collectibles for the metaverse. Stredium’s value proposition goes beyond the NFTs, since the company aims to create an entire ecosystem of linked assets and real- world experiences.