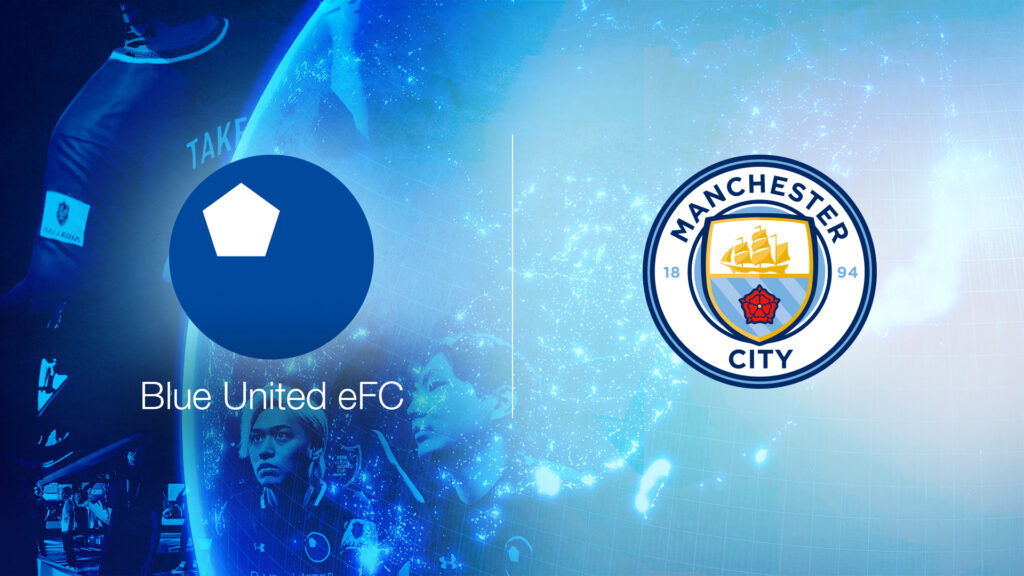 Through their collaboration, both City Football Group and Blue United eFC strive to expand their international presence with esports by promoting their activities. With the collaboration, Blue United eFC will use the name “Blue United eFC powered by CFG” as their official name and the logo of “CFG” will be displayed on the front of the team’s kit.
Blue United talent will also participate in a number of CFG and affiliate fan events, in addition to the creation of joint bespoke esports and gaming content.

Blue United eFC is the current Champion of Asia in FIFA, the biggest football video game in the world; the team has qualified to 3 out of the last 4 FIFAe World Cups, breaking industry records; and in 2021, Blue United eFC became Champion of the FIFAe Club World Cup 2021 in East Asia (Zone 2). Blue United eFC is top 5 globally and is composed of 2 professional gamers, Agu and Tsakt, which are considered the highest talent in football gaming by industry experts and media.

This is the team’s fourth season, and Blue United eFC continues to strive to achieve the official global title with one of the best soccer clubs in the world.

“I am delighted to collaborate with City Football Group, one of the most successful football business entities in the world, which owns notable football clubs such as Manchester City FC.said Takehiko Nakamura, President and CEO of Blue United. “Our objective lately has been to build our own properties so we can accomplish our vision “Contribute to the development of Japanese sports businesses and to the globalization of the sports industry to make it one of the top sectors in the world.” We are proud that our professional esports team, Blue United eFC, which was founded 4 years ago as part of this initiative and climbed to become one of the top teams in Asia, has been recognized. With this collaboration, I am hopeful that we will take another significant step in the right direction. Our company and our team will continue to strive to meet expectations, and we appreciate your continued support.”

“I’m excited about the collaboration with City Football Group.,” said Tsakt, the professional player of Blue United eFC. “Four years ago, we aimed to compete in international tournaments, but now we aim for global success. I consider Manchester City to be one of the world’s best teams in both football and esports, and I am confident our collaboration will be essential to our success at the global level.”

“Having the opportunity to work with City Football Group, owner of Manchester City, makes me very happy as a player.” said Agu, the professional player of Blue United eFC. “Since middle school, I’ve been a fan of City, and I am the person I am today because of the club. I am very honored to have this collaboration with City. Being involved with City has always been a goal of mine. Once again, I look forward to playing for City. C’mon City!!”

About City Football Group
Established in May 2013, City Football Group is the world’s leading private owner and operator of football clubs, with total or partial ownership of ten clubs in major cities across the world: Premier League Champions Manchester City in the UK, New York City FC in the US, Melbourne FC in Australia, Yokohama F. Marinos in Japan, Montevideo City Torque in Uruguay, Girona Futbol Club in Spain, Sichuan Jiuniu FC in China, Mumbai City FC in India, Lommel SK in Belgium, ESTAC in France and partner Club, Club Bolivar. With 13 offices around the world, CFG also invests in other football related businesses and projects and serves as a global commercial platform for its partners, whilst fulfilling its vision of using football for social good on a local and global scale through its clubs’ charities, foundations and other CSR initiatives.
Abu Dhabi United Group, the investment vehicle owned by His Highness Sheikh Mansour bin Zayed Al Nahyan, is the majority CFG shareholder (c.77%).  In addition, c.12% of CFG equity is held by a consortium of Chinese institutional investors led by China’s leading media and entertainment conglomerate CMC Inc. A further c.10% is owned by Silver Lake, a global leader in technology investing.