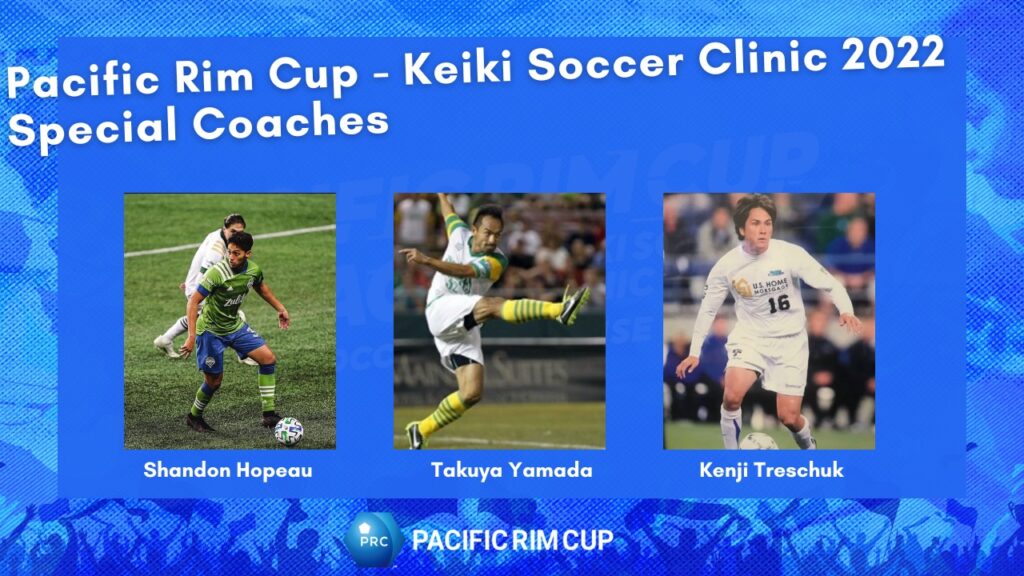 HONOLULU – Hawaii’s soccer youth will get to train with the best of the best this summer as Pacific Rim Cup brings together international soccer stars from Hawaii and Japan. Online registration opens this evening at 6 p.m. HST for hundreds of keiki soccer players and enthusiasts who seek the opportunity to train under world-class professionals at the Pacific Rim Cup 2022 Keiki Soccer Clinic on July 9 from 8 a.m. to 1:30 p.m. at the Waipio Peninsula Soccer Complex.

“We hand selected this team of coaches to showcase the exceptional soccer talent from Hawaii and Japan and to develop and inspire our Island youth to pursue their soccer dreams,” said Takehiko Nakamura, President & CEO of Blue United Corporation, the organizer of Pacific Rim Cup. “We’re planning an exciting clinic with the help of our coaches and look forward to returning to Hawaii this summer.”

SHANDON HOPEAU, HAWAII
Kapolei High School graduate Hopeau started his youth career with Hawaii Rush Soccer Club prior to being invited to participate in the Real Madrid Select camp in 2014, an invitation-only soccer camp for the top 36 youth players around the world. During his tenure on the Kapolei High School soccer team, he was named the 2015 and 2016 OIA West Player of the Year. Hopeau joined the Sounders Academy in 2016 after the Sounders claimed Hawaii as a homegrown territory, making him eligible to sign as a homegrown player and eventually becoming the leading scorer on the Sounders Academy team. He signed his first professional contract in 2017, joining Seattle Sounders FC 2 ahead of the 2017 USL season, becoming the first player from Hawaii to do so. In July 2020, he signed his first team contract before joining San Antonio FC on loan ahead of the 2021 season.

KENJI TRESCHUK, HAWAII
Moanalua High School graduate Treschuk played club soccer for the amateur Honolulu Bulls of the Men’s Island Soccer Organization prior to attending Pennsylvania State University (Penn State) on scholarship where he was a three-time Big Ten All Academic Team honoree. Upon graduating from Penn State, he played for Dutch teams HCSC and AFC34 in the Netherlands before returning to the U.S. to sign with the Seattle Sounders of USL First Division in 2007. Following a rookie season where he started 15 games out of 26 regular season games, Treschuk became the Sounders’ enforcer on the way to a United Soccer Leagues First Division title and recognized as Rookie of the Year in the 2007 USL-1 Award Finalists before moving on to Charleston Battery in 2009.

TAKUYA YAMADA, JAPAN
A former Japan national team player, Yamada attended Toin Gakuen High School in Japan, after graduate he played at Komazawa University before turning professional in 1997 where he won a variety of different national titles, including the Gold Medal for Japan at the 1995 Summer Universiade. His professional career includes playing for Verdy Kawasaki (later Tokyo Verdy) in the J1 League, clocking up over 300 appearances for the club. He was one of the iconic players of J1 League’s early years, known for his physical and charismatic strength on the field earning the nicknames of “Mr. Verdy” when he served as captain and also “The Terminator,” for his combative style. For Yamada, a most memorable highlight was playing against Real Madrid’s Zinedine Zidane, Ronaldo, David Beckham and others when he scored a goal then beat them 3-0. His career also includes playing for J.League’s Cerezo Osaka, Yokohama FC and Sagan Tosu along with FC Tampa Bay (later Tampa Bay Rowdies) for their 2010 inaugural team roster, becoming the first Japanese player to serve as co-captain in USSF Division 2 also won the championship 2012 and best 11 of the league. He returned to Japan the following year and joined FC Imabari and Nara Club before eventually retiring in 2017 at age of 43, after making a total of 562 professional game appearances.

Registration for the Keiki Soccer Clinic is available from June 13-17 online at www.pacificrimcup.com. The clinic is free and open to children ages four through 13. Space is limited and participants will be registered on a first-come, first-served basis.

Pacific Rim Cup, organizer of the professional games last held at Aloha Stadium in 2019, is bringing back the popular soccer clinic to continue its commitment of mentoring local soccer youth with hopes of returning with the professional tournament games in the future.