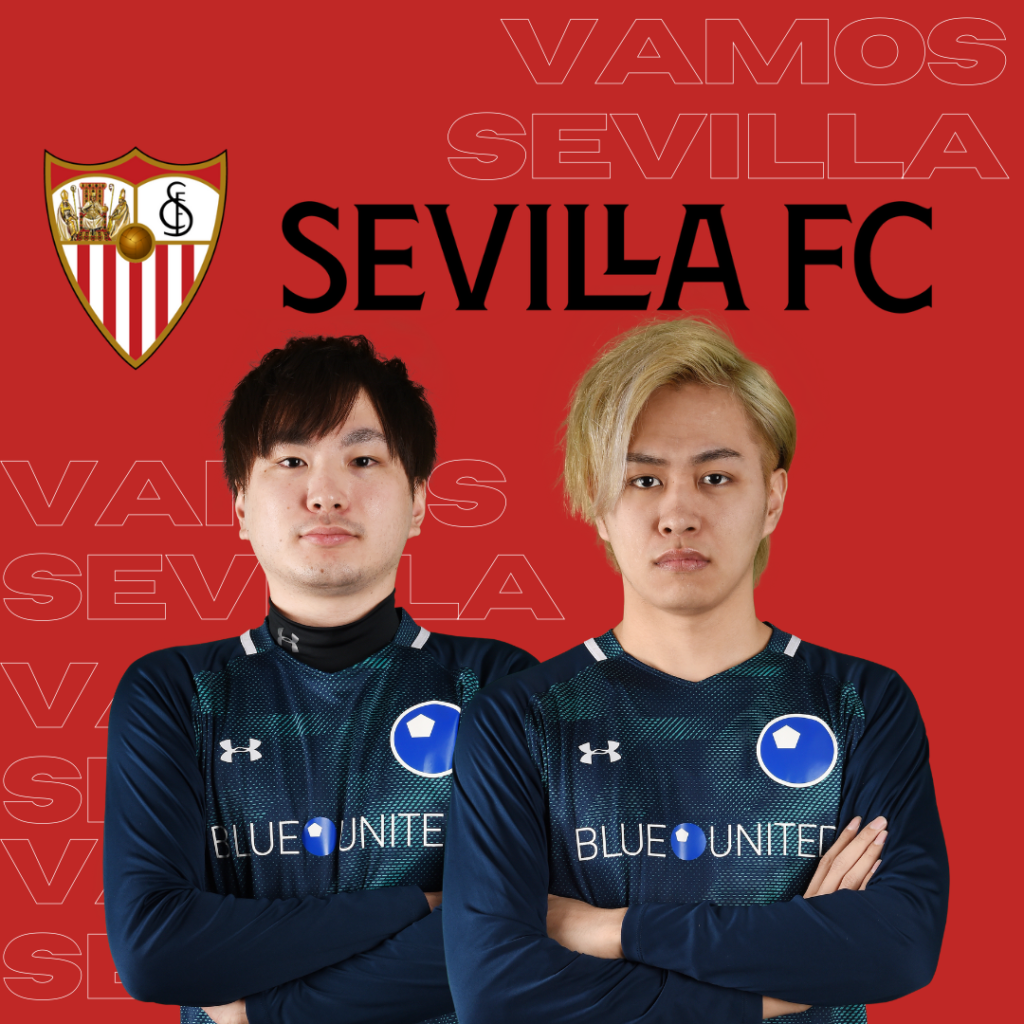 Blue United Corporation, the owner of Blue United eFC, has supported Sevilla FC as its advisor for international expansion in North America and Japan since 2019. And, as part of this collaboration, Blue United eFC will create content focused on connecting with gamers / young football fans in Japan and explain the values and philosophy of the club through that content.

The main inspiration for this content will be the philosophy of Sevilla FC, its winning mentality, the passion the club inspires in its fans, and its ability to overcome challenges and never give up.

Sevilla’s growth in the last 15 years has not only placed the Club in the top 4 of most important clubs in Spain but also it has positioned Sevilla FC as one of the fastest-growing football clubs in Europe, in terms of revenue, TV/streaming, and social media audience.

In this first piece of content, Blue United eFC has been inspired by Sevilla FC’s values and passion to create starting IX’s they recommend to fans to play as Sevilla FC in FIFA21.

Also, in order to connect at a deeper level with their young audience in Japan, Sevilla FC and Blue United eFC will encourage fans to share on Twitter with the Club (@SevillaFC_JA) their highlights, goals and amazing plays playing with Sevilla FC in FIFA and will give-away two signed jerseys to two lucky winners.

As the Champions of Asia, Blue United eFC is the best fit for Sevilla FC to do this. “For Sevilla FC, it is an honor to create activations around FIFA-EA Sports, especially in a market as important and valuable for us as Japan,” said José Castro Executive Chairman of Sevilla FC. “Our organization has always been present in Japan on the sporting and business sides, having organized an important and fantastic tour in 2017[1] and developing multiple partnerships focused on communication, sponsorship, and content creation, specifically for Japan for the last 4 years. This is a project involving a fast growing and massively followed industry, as it is the gaming industry, and in a country were gaming and esports have a huge audience. We want to wish good luck to all the gamers in Japan and we hope you always give it all when you compete, following the DNA of Sevilla FC.”

“When you work in football business you always dream to work with one of the best clubs in the world.  I am proud to have been working with Sevilla since 2019 who is one of the most prestigious clubs in the world with class, rich history, and tradition; and to extend this partnership to the gaming/esports ecosystem now.”, said Takehiko Nakamura, President and CEO of Blue United. “We have been a unique and impactful agency helping teams, leagues, and corporations in the Pacific Rim region grow internationally.  Partnering with Sevilla means a lot for us and we are honored for this opportunity and look forward to helping Sevilla achieve its goals strategically.”

“Sevilla FC is more than a soccer club, it is also a lifestyle. The club has built its history focused on always aiming for the highest goals, never giving, overcoming hard challenges and innovating”, said Javier Sanz, VP of Business and Legal Affairs at Blue United. “Part of that innovation is to find new ways to connect with Sevilla’s global audience and engage with fans in a unique way. We are excited to help the Club in its esports/gaming efforts, which we feel will be instrumental to connect with Gen Z fans and involve the club in the video game market whose global size was valued at USD 151.06 billion in 2019 and is expected to grow at a Compound Annual Growth Rate (CAGR) of 12.9% from 2020 to 2027”.

About SEVILLA FC
Sevilla Fútbol Club is Spain’s second-oldest sporting club solely devoted to football, based in Seville, the capital and largest city of Andalusia, and plays in Spain’s top flight, La Liga.

Sevilla FC is also the most successful club in Andalusia, winning a national league title in 1945–46, five Spanish Cups (1935, 1939, 1948, 2007 and 2010), one Spanish Super Cup (2007), a record six UEFA Cups/UEFA Europa Leagues (2006, 2007, 2014, 2015, 2016 and 2020) and the 2006 UEFA Super Cup. The Club was also designated by the International Federation of Football History & Statistics as the World’s best club in 2006 and 2007, being the first club to achieve this distinction in two consecutive years.
Sevilla FC has contributed many players to the Spain national team throughout their history, including FIFA World Cup champions Sergio Ramos, Jesus Navas, and Carlos Marchena.

Blue United, with offices in New York, Tokyo and Nagano, launched in Fall 2015.
Blue United Corporation:
– Focuses on elevating teams, leagues, brands, and athletes on a global scale and helps our clients on expanding internationally (business development and expansion, PR/Communications, marketing, etc.).
– Owns and manages the only international professional football tournament between club teams part of the Pacific Rim: https://www.pacificrimcup.com (Top 10 Best International Sporting Event of the Year SPIA Awards in 2018 and 2019).  Designs and executes the organization of major events and activations as a FIFA Licensed Match Agent.
– Owns and manages the first professional eSports FIFA-focused team in Japan, founded in 2017.

To learn more about Blue United Corporation, please visit: http://blueutd.com/en/ or send an email to info@blueutd.com